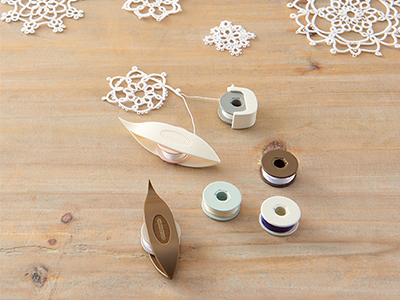 The allure of tatting is undeniable. To confirm that just sit down in the presence of any large group, pull out your tatting shuttle and start putting rings and picots together. You will immediately have a whole host of new friends all wanting to know exactly what you are doing. What is it, how do you do it, where can I get it or where can I learn how to do it? Tatting itself is a relatively new art form that is currently enjoying a genuine resurgence in popularity. With just a little practice even a novice can produce amazing lace creations and it’s surprisingly simple. Whether following a published pattern or leaning to your own creative schemes, tatting is comprised of making and arranging patterns of rings and chains and picots. But those simple rings, chains and picots produce beautiful objects that have applications to every needle art genre imaginable. So what’s not to like? Here’s what’s not to like. All the housekeeping. Traditional tatting shuttles require that you wind thread on to them before you can actually start tatting. If you want two or more colors you’ll need two or more shuttles. Or what if you’re doing a very large project requiring a lot of thread? More tatting shuttles required or you have to stop often to rewind the one in use. And where do you keep all of your thread supplies while you’re working? Like I said, a lot of housekeeping. Is there an alternative? Of course, we’re talking Clover here. They always have the solutions to enhance your creative instincts.

What does it do?

To assist you in your pursuit of all things tatting, Clover has developed an actual system of tatting products. Improving on the traditional tatting shuttle, Clover’s new Bobbin Tatting Shuttle allows you to wind your thread on a separate bobbin and then just insert it into the shuttle when needed. No longer do we need to wind our thread onto the shuttle itself. We can pre-wind as many bobbins as necessary in as many colors as necessary and all well in advance of beginning our project. And when you feel the urge you can just sit down with your Clover Bobbin Tatting Shuttle and accessories and get it on with your creative self.

Clover Bobbin Tatting Shuttles are a dramatic improvement over traditional “post shuttles” simply because we can now pre-wind our thread onto any number of bobbins in any number of colors and then simply insert them as needed. The kit comes with one bobbin shuttle, two bobbins and a convenient “winder/keeper” which doubles as handle to assist us in winding our thread on the bobbin. Bobbin shuttle kits come in two colors, white and brown. 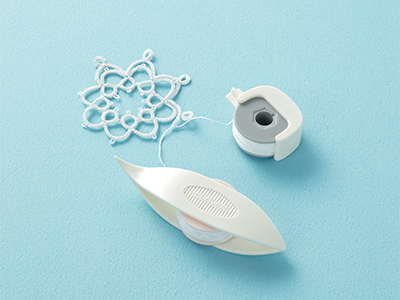 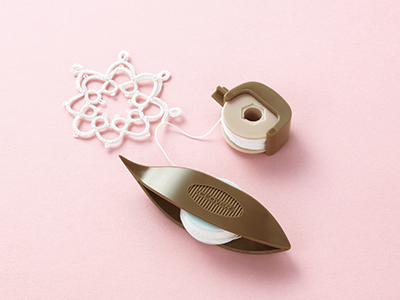 The requirement for more thread or more thread colors is often proportional to the complexity or the creativity of our project. And right in the middle of a complex or developing project is the definitely not the time we want to stop so we can wind shuttles or bobbins. To ensure that you have sufficient pre-wound bobbins for your project, Clover provides a Clover Spare Bobbin Set. The set consists of one “winder/keeper” and five spare bobbins to meet all of your pre-wound thread needs. The sets are available in brown or white. 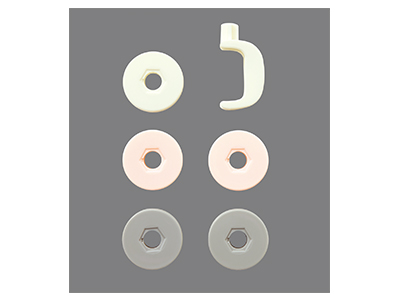 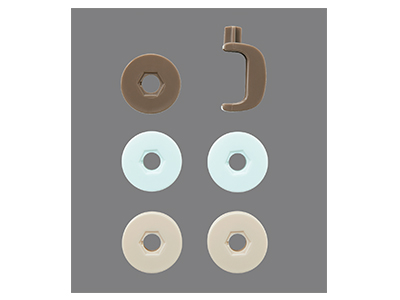 The bobbin tatting shuttle is a great idea, pre-wound bobbins are a great idea, the “winder/keeper” is a great idea. So where do we keep them? We all know that if something is small and not attached to something else it will get lost. To alleviate any potential anxiety you might have about the location of your shuttles or bobbins, Clover has produced a storage case that can hold four bobbin tatting shuttles and eighteen bobbins. With this storage case all of your tatting materials are in one convenient location. The clear plastic lid also ensures that all of your pre-wound thread colors are easily in view. And it’s the ultimate in portability. Grab it and go. All of your tatting tools are with you. 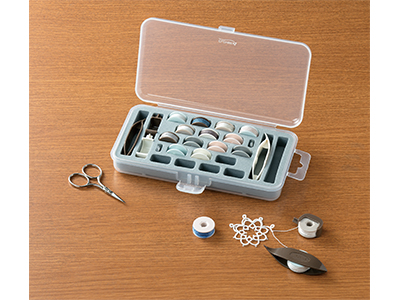 If you’re into the traditional “post” style tatting shuttle we have you covered for that as well. Clover’s storage case for tatting shuttles can carry eight tatting shuttles. The allows you to store eight pre-would tatting shuttles in as many colors as you might need. The clear plastic lid keeps all of the colors easily in view. And again, it’s portable. 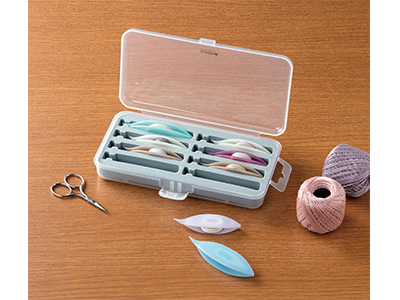 Tatting has applications to all needle art genres including fashion, heirloom, home decor or jewelry. And it really is an intriguing art form. But it looks more difficult than it is. All you need to promote this thread art skill is to provide a hands on class. Once everyone experiences the creative potential of tatting they will find ways to apply it to any art form that they desire. This is a try it and you’ll like it skill. We’ve said this before, tatting is a beautiful needlecraft art form with great appeal and unlimited creative potential.